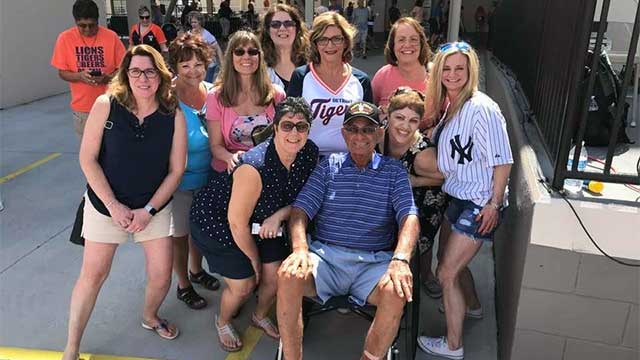 On Thursday, Joseph “Jiggs” Petrucci of Seneca Falls threw out the first pitch of a Major League Baseball spring training game between the New York Yankees and Detroit Tigers in Lakeland, Florida where he spends his winters. Check out a video of the ceremonial first pitch below.

From the FL Times:

Petrucci, 94, enlisted in the Army in June 1944 at the age of 18. He spent two weeks in basic training at Fort Dix, N.J., before moving to Fort McClellan, Ala., for 17 weeks of infantry training.

He was assigned to the 2nd Infantry Division (Indian Head Division) and began serving on the Siegfried Line in Germany Dec. 14, 1944. Two days after that the Germans launched the greatest military offensive in their history, an effort that wound up remembered as the “Battle of the Bulge.”

Petrucci went on to work a long and distinguished career at Goulds Pumps. His time there, along with his many golfing-related accomplishments, made him one of the most recognizable faces in the Seneca County community.

He is a former Seneca Falls Country Club champion, and a multiple winner of the former Seneca Lake Country Club Golf-Bowl. Petrucci has recorded several holes-in-one in his career, including a pair of aces on SFCC’s par-4 opening hole.  Read more at fltimes.com